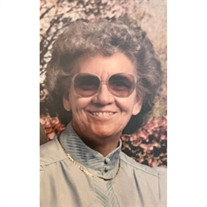 Dorothy Ellen (Barnhart) Bankard, 93, near Emmitsburg, Maryland and most recently, The Villages, Florida entered into eternal peace with her family by her side on 23 April 2022 after a long hard-fought battle with Parkinson's Disease. Born June 25, 1928 in Westminster, Maryland, she was the daughter of the late Harvey R. and Nina G. (Duvall) Barnhart. She was the wife for almost 69 years of the late Eugene F. Bankard who passed away in 2015. Dorothy was a housewife and wonderful mother to Eugene Noah Bankard of Norfolk, VA, Arthur H. Bankard and wife, Karen of Port Orange, FL, Sargeant "Dave" Bankard Sr. and wife, Jeanne of The Villages, FL; daughter, Mary Ellen Richard and husband, Gary Jr. of Walkersville. Dorothy enjoyed gardening, canning and cooking for her family. In addition to homemaking, Dorothy was employed at Castle Farms Dairy in the early 1970's and later at Liberty Manufacturing Company on Creamery Road in Emmitsburg, MD for over 30 years. She is also survived by her grandchildren, Tammy J. Sizemore, Jeremie Gremler, Jessica Bankard, Sargeant David Bankard, Jr. , Nina Bankard, Gary Richard, III, Carilynn Richard; and 17 great-grandchildren. She was predeceased by a granddaughter, Jennifer Keown; brothers John Preston Barnhart and Ernest Barnhart; The family will receive friends at Beyers Funeral Home in Leesburg, FL on 27 April 2022 from 1 to 3 pm. Musical honors will be conveyed by The Heart of Florida Barbershop Chorus A funeral service will be held at a later date at the D.D. Hartzler Funeral Home in Woodsboro, MD with Interment at Meadow Branch Cemetery, Westminster, MD Memorial contributions may be made to the Parkinson's Foundation at www.Parkinson.org

Dorothy Ellen (Barnhart) Bankard, 93, near Emmitsburg, Maryland and most recently, The Villages, Florida entered into eternal peace with her family by her side on 23 April 2022 after a long hard-fought battle with Parkinson's Disease. Born June... View Obituary & Service Information

The family of Dorothy Ellen Bankard created this Life Tributes page to make it easy to share your memories.

Send flowers to the Bankard family.