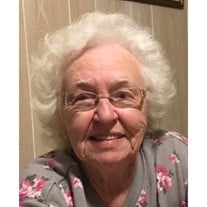 Doris "Dot" Beck-Cole finished her journey in this world in March 5, 2022. Dot was born September 26, 1929, in Lowndesville, SC, to John "Rayford" Phillips and Robbie Lucille Black Phillips (later married to John E. Carlisle). She shared cherished childhood memories of picking cotton, visiting family, and playing basketball/softball in high school. The family moved from Calhoun Falls, SC, to Lake County, FL in the early 1940s. Dot married John David Beck in 1949 and helped raise his son, Danny Lee. Their daughter, Melanie Darae, was born in 1956. John and Dot were entrepreneurs -hauling fruit, running a truck-stop (restaurant, grocery, gas station), operating a cab stand and selling insurance. In the 70s and 80s, they owned and operated the Penn-Dixie Grocery (HWY 27/441 and Picciola). John was civic minded and they joined a number of clubs in the 1950/60s (Moose/Women of the Moose, Lions, Odd Fellows/Rebekah). They cared for their families and were active in the community. When Dot was not minding the store, she would be fishing out on the boat, on the phone with a friend, out in the pool, shopping, or bowling with her league, among many other things. John passed in 2006 and Dot married Charlie Lee Cole in 2009. Dot was a member of Calvary Baptist Church of Fruitland Park, where she served for several years at the front desk, greeting those who visited the church. Dot was preceded in death by her parents, Rayford Phillips and Robbie Phillips Carlisle; siblings, Theron, Lowell, Jo Ann (Danesky), Bobby, and Beverly (Williams); first husband, John Beck; step-son, Danny Beck; and daughter, Melanie McLain, and 3 nieces and nephews. She is survived by her husband, Charlie Cole; sister, Eleanor Swanson; 21 nieces and nephews and their families; son-in-law, Thomas McLain, as well as 4 grandchildren and 11 great-grandchildren - Tara McLain of Wichita, KS, Rachel and Stephen Elliott (Andrew, Sophia, Alyvia, Emma) of Wichita, KS, Olivia and Seth Crow (Ruby, Ezekiel, Cyrus, Revere, Freya) of Prairie Hill, TX, and Max and Amber McLain (Remington, Ruger) of Waco, TX. Visitation to be held at 10:00 and funeral services to be held at 11:00 at Calvary Baptist Church on Wednesday, March 16, 2022, with internment following at Lone Oak Cemetery. In lieu of flowers, donations can be made to the missions program at Calvary Baptist Church.

The family of Doris Beck- Cole created this Life Tributes page to make it easy to share your memories.

Doris &quot;Dot&quot; Beck-Cole finished her journey in this world in March...