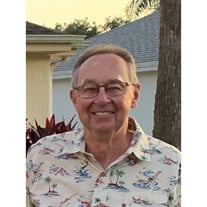 Donald Harold Reconnu (77) of The Villages, FL passed away unexpectedly on October 17, 2021. Don was preceded in death by his parents, Betty and Albert Reconnu as well as his younger brother, Lance Reconnu. Born in Pittsburgh, PA and raised in Mount Lebanon, PA; Abington, PA; Scotch Plains, NJ; and Lake Forest, IL; Don's favorite childhood memories include catching blue crabs while vacationing with his family on the New Jersey Shore as well as picking apples with his grandfather, Constant Reconnu. Don also had a horse which was a gift from his parents. Don graduated from Lake Forest High School in Illinois and proudly served his nation during a time of war. From 1965 to 1967, Don served as a sergeant in the United States Army, deploying to Cam Ranh Bay and Phan Thiet, Vietnam. He was a founding member of the Vietnam Veterans of America South Dakota Chapter 1054, and was instrumental in bringing dozens of veterans into the chapter. In 2013 he received the Veteran of the Year Award, a distinguished national honor. Don's steadfast commitment to the VVA continued even after his move to The Villages, where he joined the local VVA chapter. In 1970, Don graduated from Columbia Business School in Madison, WI. He was a respected, diligent, and hardworking business owner, with Sears stores in Algoma, WI and Watertown, SD. Don was married to JoAnn Reconnu for fifteen years with whom he had two children, Mark and Amy. In 2019, Don moved to The Villages, FL to be near family in the local area, including his brother David along with his significant other, Mary Bahry and his dear cousin Paula and husband George Jauch. He purchased his dream home there in 2020, and enjoyed tending to his yard and completing home projects. He loved driving his 1930 Ford Model A and enjoyed listening to Bruce Springsteen during daily swims. He dined out frequently, enjoying many breakfast meals at Darrell's Restaurant. Don loved vacationing with his children and their families in Lake Geneva, WI and in Kure Beach, NC. His grandson, Otto, spent extended periods of time at his home in The Villages, where they bonded over managing the wildlife that invaded plants with a pellet gun, fishing in the backyard pond, golf lessons, and bowling. Left to cherish his memory include his children Mark (Virginia) Reconnu of Manteo, NC and Amy Kelly of Williams Bay, WI; his sister-in-law, Ginger Reconnu; his Aunt Betty Lou Reconnu; nieces Beth and Paige Reconnu; nephew Ryan Reconnu; a great-niece and great-nephew; and his loving grandchildren Ymani (Daniel) Hall, Tony Reconnu, Max Reconnu, Courtney Green, Ava Kelly, Otto Reconnu, Grace Kelly, and Nicholas Reconnu. Visitation will be held at Beyers Funeral Home in Lady Lake, FL on Saturday, October 30 at 10:00 AM with a service at 11:00 AM. A subsequent burial will take place in Manteo, NC. Donations in Don's memory may be sent to the Vietnam Veterans of America chapter #1054 in Watertown, SD via check or money order to: Northeast South Dakota VVA, Chapter 1054, PO Box 1062, Watertown SD 57201 OR donations can be charged to a credit card by calling their Treasurer Bob Frink at 706-217-5950.

Donald Harold Reconnu (77) of The Villages, FL passed away unexpectedly on October 17, 2021. Don was preceded in death by his parents, Betty and Albert Reconnu as well as his younger brother, Lance Reconnu. Born in Pittsburgh, PA and raised... View Obituary & Service Information

The family of Donald Harold Reconnu created this Life Tributes page to make it easy to share your memories.

Donald Harold Reconnu (77) of The Villages, FL passed away unexpectedly...

Send flowers to the Reconnu family.