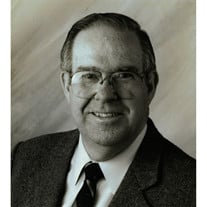 Donald D. Lawrence passed away on Tuesday, December 14, 2021 at the age of 85 in The Villages, Florida, where he retired and lived for the past 22 years. He was born on December 17, 1935 in Ruth, Mississippi. He was well known as a tall, energetic, ambitious youth who became editor of the McComb Enterprise-Journal at age 15, working his way up from delivering papers at age 7. Donald graduated from McComb High School, Class of 1953 and then moved to Baton Rouge, Louisiana to attend Louisiana State University, where he met and married the former Rosemary E. Bonner. While starting a family, he worked in banking and the financial field. He retired as an Executive Vice President at CUNA Mutual Insurance in Madison, Wisconsin in 1999. Donald enjoyed traveling and RV camping, as well as dealing and collecting antiques. He will be long remembered for the many friends he made as an antique dealer at Renninger's Antique Mall in Mount Dora, Florida and on his travels around the country. He had a positive force in the lives he touched along the way and was loved by all who had the pleasure of knowing him. Donald will be profoundly missed by his family, friends and colleagues. He is preceded in death by his biological parents Frank Alan and Vera Christine Brister, his adoptive parents at the age of 7 months, Porter Lawrence and Pernie Brister Lawrence, a brother Jimmy Duree Brister (Billie), two sisters, Voncille Brister Barker (Gerald), Allene Brister DeWitt (Charlie) and his wife Rosemary Bonner Lawrence. He is survived by two sisters Sylvia Lawrence Graves (Shot), and Ruby Brister Deardoff. Three children, Laura Lawrence Garner of Austin, Texas, Kimberly Lawrence of Brookfield, Connecticut and Edward Lawrence (Laurie) of Madison, Alabama. Three grandchildren, Alison Garner Messer (Jay) of San Antonio, Texas, Davis Lawrence and Megan Lawrence of Madison, Alabama. One great-grandchild, Jackson Messer and numerous nieces and nephews. There will be no visitation at this time, a Memorial Service will be arranged in Spring of 2022 in McComb, Mississippi. Arrangements entrusted to Beyers Funeral Home of Lady Lake, Florida.

Donald D. Lawrence passed away on Tuesday, December 14, 2021 at the age of 85 in The Villages, Florida, where he retired and lived for the past 22 years. He was born on December 17, 1935 in Ruth, Mississippi. He was well known as a tall, energetic,... View Obituary & Service Information

The family of Donald D. Lawrence created this Life Tributes page to make it easy to share your memories.

Send flowers to the Lawrence family.