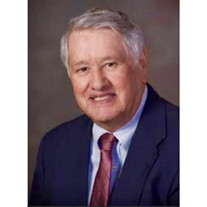 Dillard, "D.B." Boyatt went home to be with the Lord on February 25, 2022. He leaves behind a trail of brokenhearted women. D.B. was born on July 12, 1931, in Shoopman, Kentucky a.k.a. the Holler where the population of the entire county was a mere 700. D.B. struck out for a bigger and better life at 13 leaving behind the family farm. When he arrived to town, he asked a local to tell his father that he left because he knew he would be upset. D.B. proudly served in the United States Air Force in the mid-50s. This is where he discovered his love for Florida. D.B. was a Free Mason. He joined in April of 1954. He worked his way to the top with good old-fashioned hard work. He began and ended his career at Sumter Electric Cooperation. D.B. worked as a lineman before safety equipment. He used spikes and a belt. He knew the value of a dollar. As his ambitions began to grow, he ventured out on his own. He went to work all day and attended trade school at night. He began his own business of air conditioner-refrigeration/electrician. D.B. most notably served on the Board of Directors at SECO for over 30 years. D.B. began his journey as a Southern Baptist in 1987. He dedicated his life to the Lord. As a Christian, he attended local churches throughout the county. Besides Sunday service, his favorite activity was Dinner on the Grounds. Undoubtedly, if you've been to church in Sumter, he has probably worked on the AC, Fridge, or ice machine. His last place of worship was Gant Lake Baptist. D.B. believed it was his job to give back to others; he employed locals and supported others trying to launch businesses. He helped everyone regardless of their ability to pay or the time of night, sometimes being paid in fruitcake or sugar cane. If your AC went out in the middle of July, you can guarantee he would be by. If you were a widower and your water pump stopped working at midnight, he would be there. Make no mistake, you knew where you stood with him. Most often times because he would tell you. D.B. was a straight shooter. He would often time refer to folks as "educated beyond their intelligence." D.B. is proceeded in death by four sisters and two brothers. He has two surviving sisters. D.B. leaves behind a legacy of one son, Ronald, and four beautiful daughters; DarLinda, Sharon, Anita, and Julia. Grandchildren-Amanda, Kimberly, Michelle, Autumn. Jessica and Julia. Taylor. Austin. Nicole and Emilee. Numerous great grandchildren. In lieu of flowers the family requests support of The Alzheimer's Association. A service will be held on Thursday, March 03, 2022 at Purcell Funeral Home Chapel at 12:00 noon (with visitation from 10-11) with Pastor Ed Button officiating. Interment will follow service at Florida National Cemetery.

Dillard, "D.B." Boyatt went home to be with the Lord on February 25, 2022. He leaves behind a trail of brokenhearted women. D.B. was born on July 12, 1931, in Shoopman, Kentucky a.k.a. the Holler where the population of the entire county was... View Obituary & Service Information

The family of Dillard Brown Boyatt created this Life Tributes page to make it easy to share your memories.

Dillard, &quot;D.B.&quot; Boyatt went home to be with the Lord on February...

Send flowers to the Boyatt family.