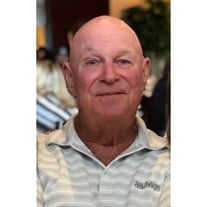 David Frank Mathews passed away in the early morning hours of March 16th, 2022 in Lady Lake, FL (The Villages). He was born on January 16, 1948, in Jacksonville, FL to Doris and Julis Mathews. He was 74. A gifted athlete, he attended Jacksonville University and played on the baseball team for the Dolphins. Also, an avid golfer, David played golf and softball his entire life. Most recently, he played third base for the Division 5, Bison and always warned the other team not to hit it to him unless they wanted to be thrown out. He always talked about how much fun he had playing ball with everyone, and he looked forward to every game. As for golf, he had as much fun and really was an outstanding golfer. Competitive by nature, he also liked playing card games and taught his daughter and grandchildren how to play 3-13 several years ago, and they all still play the game and have taught others the game. His last employer before retiring to the Villages was JB Hunt. As a JB Hunt driver, he drove over one million miles accident free earning a plaque honoring this milestone. He also earned two Service Award rings with JB Hunt. Always ready to lend an ear and provide sound advice, David was a loved father, brother, Papaw and friend. He always was cheerful and enjoyed life. For leisure, he enjoyed getting away with friends on cruises. David is survived by his daughter, Kathleen (husband, Barry), grandchildren - Jessica (husband Cameron and great-grandson, Colin), Chris (wife, Emma and great-grandson, Archie), and Kayla. He is also survived by his son, David, sister, Shirly, and his brother, Bobby. His sister, Alene, and his parents preceded him in death. David's remains will be cremated and his ashes will be spread at Merritt Island at the same site as his one true love, Carolyn.

David Frank Mathews passed away in the early morning hours of March 16th, 2022 in Lady Lake, FL (The Villages). He was born on January 16, 1948, in Jacksonville, FL to Doris and Julis Mathews. He was 74. A gifted athlete, he attended Jacksonville... View Obituary & Service Information

The family of David Frank Mathews created this Life Tributes page to make it easy to share your memories.

David Frank Mathews passed away in the early morning hours of...

Send flowers to the Mathews family.