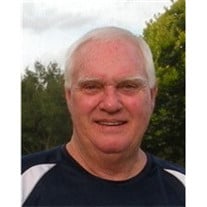 Clifford E. Carpenter (Cliff) (1945-2021) of Lady Lake, Florida passed away peacefully surrounded by his family on October 15, 2021 at age 76. He is survived by his wife of 54 years, Laurie Carpenter, and his daughters Carrie Carpenter of Cleveland, Ohio and Kim Carpenter Walker and son-in-law Robert Walker of Rocky River, Ohio, and his beloved dog Scarlett. Born in Morristown, Tennessee, Cliff graduated from Lakewood High School outside of Cleveland, Ohio in 1963, and in his retirement enjoyed reconnecting with former classmates. Cliff and Laurie were high school sweethearts, where he played football and ran track. He attended Miami University. He raised his family in Medina, Ohio for 26 years. He made sure his daughters had every opportunity in education and in life, and was always in the stands cheering them on. An avid golfer, Cliff belonged to Westfield Country Club in Medina county, where he once won the Blue Coat club championship. Over his lifetime, he shot four holes in one. His golfing buddies called him "Cliffie." His family often commented that he golfed more than he worked, and when he wasn't golfing, he was watching professional golf on television. Cliff spent his career in auto parts and owned his own distribution company. He sold the company and retired to Sarasota and then Lady Lake, Florida, where he enjoyed even more golf. His home looked over the 14th hole, and he could often be found driving around the neighborhood in his golf cart with his dog by his side. Cliff lived life to the fullest. He approached each meal with enthusiasm, and his friends called him the "meat man." He loved traveling, cruising, cooking, eating, shopping for excessive amounts of meat, and hosting gatherings of friends and dogs with Laurie in their swimming pool. Cliff was an active volunteer along with Laurie for Southeastern Guide Dogs. In lieu of flowers, please consider making a donation to Southeastern Guide Dogs online at http://participate.guidedogs.org/goto/Cliff. Cliff has stipulated no memorial service but the family will host a party at a later date. Arrangements entrusted to Beyers Funeral Home in Lady Lake, Florida.

Clifford E. Carpenter (Cliff) (1945-2021) of Lady Lake, Florida passed away peacefully surrounded by his family on October 15, 2021 at age 76. He is survived by his wife of 54 years, Laurie Carpenter, and his daughters Carrie Carpenter of Cleveland,... View Obituary & Service Information

The family of Clifford Carpenter created this Life Tributes page to make it easy to share your memories.

Send flowers to the Carpenter family.