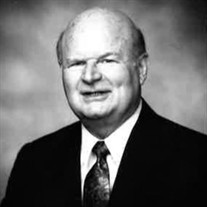 It is with great sadness that the family of Charles Strickland announces his passing on Sunday, June 19, 2022 with his daughter by his side. Born in Columbus County, North Carolina in the 1920’s, Mr. Strickland was part of the “greatest generation”. As a child, his family moved from North Carolina to Jacksonville, Florida. As a young man, he began his career in banking with ‘American Finance Corporation’ eventually being promoted to corporate headquarters in Washington, D.C. Later he joined Citizen’s National Bank in Leesburg, Florida as Senior Vice-President for 25 years. Mr. Strickland was a Florida Supreme Court State Mediator, Mayor of Leesburg 1975, 1979, 1982, 1985, 1990, and Leesburg Commissioner for 16 years. A member of Morrison Methodist Church, he was an honorable man who never met a stranger and devoted much of his time to various charities and organizations. He was a 32-degree Master Mason of the Morocco Temple Grand Lodge #58 of Jacksonville, Florida, a Leesburg Chamber of Commerce member, a dedicated man to traditional values. He felt a responsibility to make his contributions to society. He was a FL Supreme Court State Certified Mediator. He received Leesburg Regional Medical Center’s appreciation award for service, Elk of the year in 1977-1978, Legislative Assistant for Lake County. He was instrumental in the establishment of the Lake County Affordable Housing committee, awarded the Good Government award by the Leesburg Jaycees in 1990-1991. He was a founder of the Low-Income Housing of Leesburg, FL, a member and Meritorious Award winner of the Lake County League of Cities, 1972-1994, and received the East Central FL Regional Planning Council Appreciation Award 1992-1994, and he was a longtime member of the Leesburg Quarterback Club. He was preceded in death by his beloved wife of 66 years, Betty. He is survived by his children: David Strickland (Cindy), Jeannie Keedy (Jim), and Jim Strickland (Sheryl). He was much loved and will be deeply missed. A private graveside service will be held Friday, July 1, 2022, at Greenlawn Cemetery in Jacksonville, Florida. Arrangements entrusted to Beyers Funeral Home of Lady Lake, Florida.

It is with great sadness that the family of Charles Strickland announces his passing on Sunday, June 19, 2022 with his daughter by his side. Born in Columbus County, North Carolina in the 1920&#8217;s, Mr. Strickland was part of the &#8220;greatest... View Obituary & Service Information

The family of Charles Curtis Strickland created this Life Tributes page to make it easy to share your memories.

It is with great sadness that the family of Charles Strickland...

Send flowers to the Strickland family.