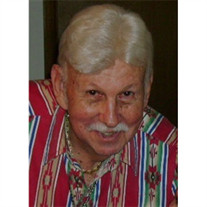 Charles C. Stokes, 92, went to his heavenly home Thanksgiving morning after a lengthy battle with dementia. He passed away peacefully at home after a short period under the care of Cornerstone Hospice, Lady Lake, Florida. He is survived by his loving wife, Virginia L. (Smith) Stokes. Charles and Virginia had just celebrated their 66th wedding anniversary on October 7th. Charles was an avid pet lover and is also survived by his two cats, Gabby and Big Daddy. He was the last surviving member of his generation of the Stokes family. He is also survived by several nieces and nephews, great nieces and nephews and great, great nieces and nephews and their families. Mr. Stokes was born January 5, 1929, in Frostproof, Florida, to the late Daniel Webster and Bertha Mae (Connell) Stokes. He was the grandson of 2nd Lt. Burrell Thomas and Levicy (Altman) Stokes. Burrell T. Stokes served in both Indian and Civil Wars. The Florida Genealogical Society has recognized Burrell T (1817-1865) as a Florida State Pioneer. Charles' father, "Dan" Stokes, was a prominent cattle rancher in Polk County, Florida, and had also contributed to the pioneer settlement of Central Florida. Mr. Stokes graduated from Pahokee High School, class of 1947, Pahokee, Florida. He was always proud to talk about his good friend, Mel Tillis, country singer, who also was a Pahokee graduate. Charles always had a great love for country music. Mr. Stokes served in the Army during the Korean War 1951-1953. He was a member of the American Legion Post #347 in Lady Lake, Florida, a lifetime member of the VFW Post #8083 in Belleview, Florida, and a member of the Military Order of Stars and Bars. Mr. Stokes was the youngest of six children. He was predeceased by William Lovell, Woodrow Lovell, D. W. Stokes II, Marie (Stokes) Blackwell and Marion (Stokes) Sanders. A graveside service will be held on December 7th at Shiloh Cemetery, Fruitland Park, Florida, at 1:00 P.M., with Pastor Joey Willis of Eagles Nest Baptist Church officiating. Charles was a long time member of Eagles Nest Baptist Church. The service is open to the public for anyone who would like to attend. A special thanks to Pastor Joey, our church family, our family and friends and Cornerstone Hospice of Lady Lake, who have been such a blessing. In lieu of flowers contributions may be made to Eagles Nest Baptist Church, 4650 Eagles Nest Road, Fruitland Park, FL 34731.

Charles C. Stokes, 92, went to his heavenly home Thanksgiving morning after a lengthy battle with dementia. He passed away peacefully at home after a short period under the care of Cornerstone Hospice, Lady Lake, Florida. He is survived by his... View Obituary & Service Information

The family of Charles C. Stokes created this Life Tributes page to make it easy to share your memories.

Send flowers to the Stokes family.