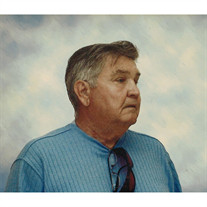 THE MOST AMAZING JOKE AND STORYTELLER Leesburg, Fl - Charles Curry (Charlie) passed away peacefully at the age of 85 after telling his last inappropriate joke, which cannot be repeated here. He is survived by his children: Beth and spouse Stephen Arman; Victor Curry. His grandchildren: April and spouse Joshua Lewis; Christine and spouse Charles Warren; Justin Curry. Great-grandchildren: Zen, Gavin, Zailen, Arissa and Emmy. He is also survived by his many nieces and nephews who thought he was the greatest thing since sweet tea: Billy Ray, Karen, Ricky, Wayne, Lisa, Christa, Deborah, Virginia, June, Roy and Dixie. Charlie was predeceased by his wife Evelyn, son Timothy, mother and father Verdie and Baynard, brothers William and Larry and his sister Vonice. Charlie was born on January 17th, 1937 in Nashville, GA to Verdie and Henry Baynard Curry. He played football at Umatilla High School and graduated in 1953. He married his first love, Evelyn shortly after in 1954. Charlie lived a full life and wore many hats. He spent a few years racing stock cars. Charlie worked hard all his life; as a supervisor at Howey-in-the-Hills Citrus Co-op as well as running his own welding company. With so many paths travelled it's no wonder he always had a story to tell. Charlie was one of the best storytellers and jokesters we've ever known. He loved to tell stories and had a way of captivating everyone around with his quick wit. He would draw you in and before you knew it, you were there with him on his many hilarious and sometimes salacious adventures. Few of which are appropriate for an obituary. He brought laughter wherever he went and everyone gladly came along for the ride. With just a few words and a smile, he made you feel special. He showed his love through humor and if you were lucky enough to know him, you're a better person for it. Of all Charlie's adventures, he always said that his best years were living on Captiva Island where he managed the Nani Lii' Cottages and the Captiva Hideaway together with his wife, Evelyn. He loved to fish and if you got to spend time on one of his chartered boat tours, he would take you to the island's best kept secrets and keep you laughing the whole way. Did you ever hear about the nuns? Despite living such a full life, if you asked Charlie about his legacy, he'd have told you it's his family. Those of us he left behind will remember him as the Elvis look-a-like surrounded by laughing faces. The father, grandfather, great grandfather, uncle and friend we loved and admired. The hard worker, jack of all trades and the most amazing joke and storyteller. Charlie taught us a lot about what makes a good story, as well as what makes a good life. "Life does not cease to be funny when people die any more than it ceases to be serious when people laugh." -George Bernard Shaw "And while you're sleeping I'll try to make you proud. So, Daddy, won't you close your eyes? Don't be afraid. It's my turn to chase the monsters away." -James Blunt

THE MOST AMAZING JOKE AND STORYTELLER Leesburg, Fl - Charles Curry (Charlie) passed away peacefully at the age of 85 after telling his last inappropriate joke, which cannot be repeated here. He is survived by his children: Beth and spouse Stephen... View Obituary & Service Information

The family of Charles Baynard Curry created this Life Tributes page to make it easy to share your memories.

THE MOST AMAZING JOKE AND STORYTELLER

Send flowers to the Curry family.