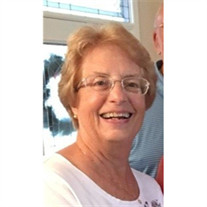 When Carol walked into a room, her grace and kindness illuminated and touched everyone in it. On March 12, 2022 Carol passed away in Leesburg FL due to complications from surgery to repair a broken hip. Carol was born in Alexandria VA on July 18, 1945 to the late Lawrance Jones and Eleanor Swann Jones and married Jesse N. Graybill, Jr. on September 11, 1965. Carol could talk to anyone. She always had time and concern for people and her life was full of service. These qualities were demonstrated over a long career including positions at the Department of Parole & Probation, Juvenile Services, the School Board, and at Lackey High School. She graduated from the Catherine Gibbs School in Boston in 1964, and later became a Certified Professional Secretary. She served as president of the local chapter of the Certified Professional Secretaries Association. After retiring from her career, Carol continued working at a mastectomy salon and in wealth management. Carol's generosity was expressed in countless ways. She was very generous with her time as a volunteer, including the Linus Project, Rolling Thunder, Charlotte Hall Veterans Home, Blue Knights, St Joseph's Parish in Pomfret MD, and various women's organizations. She was known for the annual Pig Roast which she and Jesse joyfully hosted at their home for over 20 years, an event that brought together friends and family from all over the country. Her many hobbies included knitting and crochet, crossword puzzles, quilting, and she was a prolific sewer - the monogrammed, hooded beach towels she made are treasured by the many people who received them as gifts. In 2017 Carol and Jesse moved to Leesburg FL to make a new home in their retirement. In Leesburg, Carol made many new friends and enjoyed card games, dominoes, and other pursuits. Carol loved to travel, with trips to Japan, Hawaii, cruising, and to visit family and friends all over the country being among favorite destinations. She loved Christmas and helping Jesse with his extensive Christmas decorations. Carol will be missed by her husband Jesse, her son Jesse Lawrance and daughter-in-law Laura, her brother Gerald Jones, plus countless additional family and friends who cherished her presence in their lives. She will be interred at St Joseph's Parish cemetery in Pomfret, MD.

When Carol walked into a room, her grace and kindness illuminated and touched everyone in it. On March 12, 2022 Carol passed away in Leesburg FL due to complications from surgery to repair a broken hip. Carol was born in Alexandria VA on July... View Obituary & Service Information

The family of Carol Diane Graybill created this Life Tributes page to make it easy to share your memories.

When Carol walked into a room, her grace and kindness illuminated...

Send flowers to the Graybill family.