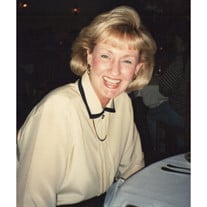 Carol Ann D'Angelo, 75, of The Villages, FL, passed away on Wednesday, February 16, 2022. She was born March 21, 1946, in Hoboken, NJ, and resided in New Jersey for 61 years prior to relocating to The Villages in 2007. Carol had a gift to connect with others, even total strangers, and could provide understanding and comfort in a way that made everyone feel at home. Her compassionate and empathetic spirit often allowed others to open up to her quickly and deeply; and, regardless of whatever struggles she was personally enduring, Carol would never hesitate to share someone's burdens and bring light and love to their world. Her greatest love was her family. She met the love of her life, Ernie, on June 28, 1961. High school sweethearts, Carol and Ernie married on April 23, 1966, and enjoyed nearly 56 years of marriage. Never willing to be separated from her great love, when Ernie was drafted into the army in 1969 and stationed in South Korea, she sold everything they owned, found a job with a civilian contractor overseas, and moved halfway around the world to be by his side. Upon returning home, she and Ernie began a long, difficult and often heartbreaking road to the role that would give her the greatest pride and joy of her life, motherhood. Carol endured years of infertility treatments and disappointments with unflappable tenacity. She wanted more than anything to be a mother, and, in 1979, after 13 years of marriage, her son Ernie, Jr. was born. Her efforts were well rewarded, as she and her son shared a very special bond, a unique closeness, and a deep and genuine friendship. Carol was an incredible mother, devoted to her son and always willing to sacrifice her own time in order to be involved in his activities. Through that involvement, she became a mother figure to many more children over the years. Most of her son's friends and classmates affectionately referred to her as "Mama De" for the love and support that she provided and the fun that she created and shared with them. Carol took such pride in being "Mama De" that she made it her license plate for many years. In 1987, Carol was diagnosed with Scleroderma. At the time, her life expectancy was estimated at a mere five years. Unwilling to accept being torn from her beloved husband or missing out on the major milestones of her son's life, Carol fought this disease for 35 years with a spirit that redefined "strength" and in a manner that redefined "dignity." She and her husband, Ernie, became very involved with the Scleroderma Foundation, working tirelessly on fundraising efforts to support medical research. Carol personally took part in various drug trials, fighting for her own life as well as those of others. Though she eventually succumbed to this disease, Carol never let it define her. As things became more and more difficult, she always maintained joy in her life in a way that brought happiness to those around her. Carol was predeceased by her mother Ida Mueller Abramowitz, father Alexander Abramowitz, and brothers Robert and Alan Abramowitz; and survived by her husband Ernest D'Angelo, son Ernest D'Angelo, Jr., sisters Joan Haight and Audrie Abramowitz, sister-in-law Josephine Abramowitz, and many other dear friends and family members. A Mass of Christian Burial will be celebrated Wednesday, February 23 at 10:00 AM at St. Mark the Evangelist Roman Catholic Church, 7081 SE HWY 42, Summerfield, FL 34491. In lieu of flowers, donations to the Scleroderma Foundation are appreciated. Arrangements entrusted to Beyers Funeral Home of Lady Lake, Florida.

The family of Carol D'Angelo created this Life Tributes page to make it easy to share your memories.

Send flowers to the D'Angelo family.