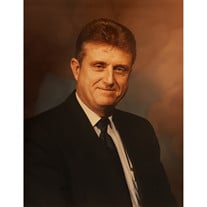 HEDGCOCK, Colonel (Retired) Robert Eugene, 87, a resident of Fruitland Park, FL died February 2, 2022. Graveside services will be held February 17, 2022 at 1:30 PM at Florida National Cemetery-Bushnell, FL. The Processional will form at 208 West Guava Street, Lady Lake, FL 32159 at 11:45AM February 17, 2022. Colonel Hedgcock will be buried with Military Honors. Born May 13, 1934, in Washington, D.C., he was the son of the late Leland Merrill Hedgcock, a Civil Engineer and Deputy Director of Highways for the District of Columbia and Esther Ann Hedgcock (nee Stephens), a graduate of The Walter Reed Army Hospital second nursing class (commissioned a 2nd Lieutenant and received a RN degree); and grandson of the late Dr. George Grant Hedgcock, a plant pathologist with the U.S. Department of Agriculture and Laura Ladell "Della" Merrill Hedgcock. He is a direct line descendant of one of the early settlers of Maryland, William Hitchcock who left Kent, England and settled in Calvert County, MD. The surname changed to Hedgecock when the Family moved to North Carolina and when the Family migrated to Illinois in 1833 the spelling of Hedgcock was adopted. He is survived by his wife of 65 years, Claire Hedgcock; sister Dianne Wiley and her husband John Wiley of Lewisburg, WV; daughter, Andrea Purdon and her husband Dr. Robert Purdon of Eustis, FL; daughter Kathryn Keeton and her husband Karl Keeton of Kapolei, HI; son Thomas Hedgcock and his wife Kim Hedgcock of Leesburg, FL; three grandchildren Mariel Purdon; Kyle Purdon; Dr. Kira Purdon-Hess and her husband David Hess; two great grandchildren Kayden Purdon and Beckett Robert Hess. In addition to his parents, he was predeceased in death by a sister, Joan Patricia Smith of Chambersburg, PA. After growing up in Silver Spring, MD, he graduated in 1948 from Montgomery Blair High School in Silver Spring, MD, and he attended Western Maryland College (now McDaniel College) in Westminster, MD on a football and track scholarship. There he met a classmate who later became his wife, Claire Beth Gates, the daughter of the late Dr. Thomas David Gates, a dentist in Washington, D.C. and Estelle Gates. Shortly after graduating from college with a Bachelor of Arts degree, they were married in December 1956 in Washington, D.C., and Colonel Hedgcock was commissioned in Takoma Park, MD as a Second Lieutenant Armor through the U.S. Army Reserve Officer Training Corps (ROTC). He served in the Korean War, combat zone of Vietnam, and on the front of the Cold War in Germany. His career was highlighted by duty in five U.S. Army Divisions (3rd Armored, 4th Armored, 2nd Infantry, 2th Infantry and 1st Cav.), general staff at all levels (Division, Corps, Field Army, United Command, Army General staff and Joint Staff). Colonel Hedgcock possessed a high level of technical proficiency and was an expert in the development and maintenance of Armament, and Track and Wheel Vehicles. He was a very capable logistician and was selected for the Logistician Development Program and awarded the SI 7Z. He retired from the U.S. Army as a Colonel after serving 33 years of active duty, and made the decision to retire to Florida to be near his children and to live on Picciola Island on Lake Griffin, Fruitland Park, FL. Colonel Hedgcock is a graduate of the U.S. Army Command & General Staff College, Fort Leavenworth, KS, and Colonel Hedgcock received numerous awards and decorations to include the Legion of Merit, Bronze Star Medal, Meritorious Service Metal with 2nd OLC, Meritorious Unit Citation, Army Commendation Medal with 2nd OLC, RVN Campaign Medal, Vietnam Service Medal w/4 SVC stars, Vietnamese Technical Service Medal 1st Class, Two Overseas Service Bars, Overseas Service Ribbon w/3, Army Service Ribbon, and National Defense Service Metal. His family and friends dearly miss him, but know he is in a better place. He took great care to appreciate and encourage his loved ones and he loved his cats so much. He served his country honorably and raised three fantastic children. He was an extreme football fan. If there was a game on, he was watching it. He enjoyed repairing cars, antique clocks, and computers, and researching genealogy. He was the keeper of the family genealogy and published a genealogy book in 2000 entitled "The Hitchcock, Hedgecock, Hedgcock, Family in Maryland and North Carolina and their Descendants". He volunteered with the local computer club, taught computer genealogical application and was very active in several computer user groups providing personal computer training. He was a member of the Sons of the Revolution (SAR) and member of the Veterans Memorial Post American Legion Post 347. The Hedgcock family sends sincere thanks to neighbors, friends and relatives for their prayers and support these past weeks. In lieu of flowers, the family requests contributions be made to Lifestream Behavioral Center, AIMS Program, Post Office Box 491000, Leesburg, FL 34749-1000 at (352) 315-7500. Arrangements entrusted to Beyers Funeral Home and Crematory, Lady Lake, FL

The family of COL (Ret) Robert Eugene Hedgcock created this Life Tributes page to make it easy to share your memories.

Send flowers to the Hedgcock family.