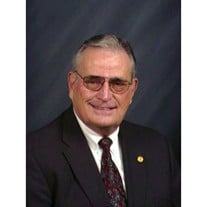 Claude Robert (Bob) Lovell Jr. died peacefully at home on January 17, 2022 after a battle with cancer. Bob was Born in Ocala Florida on New Year's Day, 1937 and became the first baby born in Marion County that year. He was the son of Claude R. Lovell Sr. and Nelva Irene Lovell. Bob had one brother, Jack Lane Lovell. He married Jewell Barnhill from Mullins, South Carolina in 1962 and had three children, Claude Robert III, born in 1963, Kelly Elisabeth, born in 1966 and adopted son, Karl, born 1969. Bob's grandparents, great grandparents and great, great grandparents were pioneer families who settled in Central Florida before 1850, and several were veterans of the Civil War and the Spanish-American War. Bob spent the first seventeen years of his life in Ocala Florida where his father was a prominent businessman and truck farmer. Bob graduated from Ocala High school in 1954 and attended the University of Florida where he received an Associate of Art's Degree. He later graduated from Florida State University with a degree in Education (1961) and then graduated from Southeastern Baptist Theological Seminary with a master's degree, (1965). He pastored churches in North and South Carolina and Florida. He was also an officer in the US Air Force Reserve for many years. Bob's family purchased a business in Leesburg Florida in 1955 and moved from Ocala shortly afterwards. Bob would call Leesburg home for the rest of his life except for several years as a resident of North and South Carolina while pastoring. Bob had two great grandfathers who served and fought for the confederates States in the Civil War. He was an ardent supporter and member of the Sons of Confederate Veterans, an organization whose mission is to preserve the reputation of the million or more Southern men who served and to honor the sacrifice of almost three hundred and fifty thousand Confederate Soldiers killed in the War between the States. Bob was a Confederate Civil War reenactor until his death. After his father's sudden death, Bob decided to move back to Leesburg and continue his father's auto parts business. At the same time Bob became involved in politics. He was elected Chairman of the Lake County Republican Party and later elected as Republican State Committeeman for ten years. In 1980 Bob was voted the most outstanding Republican in Lake County by the Republican Executive Committee. In 1984 bob was elected to a seat on the Leesburg City Commission. He held that seat until he retired in 2007 and after serving five one-year terms as Mayor of Leesburg. Bob held many other important positions while serving on the Commission. In 2004 Bob was awarded the "Most Valuable Citizen" by the Leesburg Partnership. He was also a life member of The Florida Metropolitan Power Association, was on the advisory board of the federal, Southeastern District Small Business Administration, was chairman of the Lake County Water Alliance for three years, was appointed to the Ocklawaha River Chain of Lakes Restoration Committee and served for five years on the board of the Northeast Florida State Mental Hospital located in Macclenny, Florida. Bob also served for many years as an advisory board member of Lake County's Transportation Disabled and served on the board of ARC (Association of RetardedCitizens). In 2005 Bob was recognized by the Florida League of Cities for over twenty years of service to his community and the City of Leesburg. Bob became a Mason in 1964 and a Shriner with Omar Temple in Charleston South Carolina. He remained a member of Masonic Lodge number 58 in Leesburg the rest of his life. While on the city commission, Bob was instrumental and proud to be a part of many civic projects for the City of Leesburg including the City Hall Expansion and grounds project, the new Public Library, the new Police Station, the Leesburg Marina, and the development of the Leesburg Airport into an International airport among many others. After the devastating citrus freezes of 1983 and 1985 it became necessary to sell the Auto Parts business and to find employment elsewhere. Bob taught High School history at DeSisto private School in Howey in the Hills and Stockbridge, Massachusetts. Bob was later employed at LifeStream's Mental Health Center as an intake counselor and after-care case manager. For almost another fifteen years Bob would work for the Department of Children and Families as a Senior Protective Services Counselor, Protective Services Supervisor, Protective Investigator, Protective Investigator Supervisor and finally as a Court Liaison for DCF's District 13. Bob retired from DCF in 2004 and from the City Commission in 2007. After taking the State Real Estate exam, Bob became a successful realtor from 2007 until his retirement in 2019. He wrote, and published an autobiography, "Cracker Outlaw" which tells many historical stories from his family and of Central Florida. In addition to his parents, he was predeceased by his brother Jack. He is survived by his wife, Jewell Barnhill Lovell, his Son Claude Robert Mukaisu and his husband William Mukaisu of Leesburg, Daughter Kelly Manke Scirrotto and her husband Mark Scirrotto also of Leesburg, and Son Karl Meszaros and his wife Shannon Meszaros of Winston-Salem, NC. He is also survived by niece Vickie Lenhart, ten grandchildren and twelve great-grandchildren. A memorial service will be held at the Leesburg Venetian Center on February 12, 2022 at 2PM in Leesburg, FL. In lieu of flowers, gifts in his memory may be made to Magnolia Baptist Church, Apopka, FL, where Bob attended for many years. Condolences may be left at www.beyersfuneralhome.com, all arrangements entrusted to Beyers Funeral Home and Crematory, Leesburg, Florida.

Claude Robert (Bob) Lovell Jr. died peacefully at home on January 17, 2022 after a battle with cancer. Bob was Born in Ocala Florida on New Year's Day, 1937 and became the first baby born in Marion County that year. He was the son of Claude... View Obituary & Service Information

The family of Bob Lovell created this Life Tributes page to make it easy to share your memories.

Send flowers to the Lovell family.