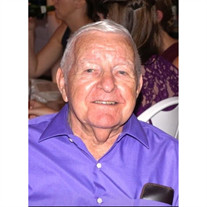 Arthur A. Moeller Age 89 of Oxford Florida, formerly of East Stroudsburg, passed away peacefully April 20, 2022. Born September 8, 1932 in Springfield Gardens, NY he was the son of the late Hugo O. and Agnes M. Moeller. The family moved to Minisink Hills PA when Art was 2 years old. He attended Smithfield Elementary School and graduated from East Stroudsburg High School. After graduation he enlisted in the United States Marine Corps., where he served for 13 years before transferring over to United States Air Force for 7 years, retiring after 20 years of military service in 1973. He worked at several different jobs over the next 25 years including East Stroudsburg Zoning and Codes Officer. When Birdie retired ( her dream was to live in Florida) they moved to Fruitland Park, Florida. With age, Art mellowed, slowly. He loved his family but had a hard time expressing it verbally. He was a patriot who served his country, honored the flag and believed that Jesus Christ was his Lord and Savior. When his youngest child graduated from East Stroudsburg High School, he served on the East Stroudsburg School Board for many years. Art lived a full life and loved the Pocono Mountains, especially the Delaware River. He could often be seen in his canoe retrieving golf balls that Shawnee golfers hit into the river. . In addition to his parents, he was preceded in death by his wife Alberta (Birdie] in 2016 , siblings, Harry Wickman, Hugo Moeller, Paul Moeller, and Margaret Heller; his son, Mark Moeller and grandson, David Cobb. His dearest companion "Scooter" went to wait for him at the Rainbow Bridge on March 12, 2022. Art is survived by his daughter Vicki Cobb (Rick), sons Karl Moeller (Judy), Arthur Moeller Jr aka Skip (Karen) Grandchildren: Missy Hughes, Janet VanHorn, Jason Cobb, Travis Cobb, Julie Cobb, Jon Moeller, Brian Moeller, Luke Moeller as well as 11 great grandchildren and several nieces and nephews, He is also survived by his loving friend Judy Ellsworth. The family would also like to thank everyone at The Carriage House Independent Living for all the love and kindness over the past 2 years. He said it was like living at a resort! A memorial service will be held on Friday May 27th at 10am at St Mark's Lutheran Church in Minisink Hills (off River Road) burial to follow in Laurel Hill Cemetery. In lieu of flowers, memorial remembrances may be made to St Mark's Lutheran Church % 117 Broad St Stroudsburg, Pa 18360

Arthur A. Moeller Age 89 of Oxford Florida, formerly of East Stroudsburg, passed away peacefully April 20, 2022. Born September 8, 1932 in Springfield Gardens, NY he was the son of the late Hugo O. and Agnes M. Moeller. The family moved to... View Obituary & Service Information

The family of Arthur Moeller, Sr created this Life Tributes page to make it easy to share your memories.