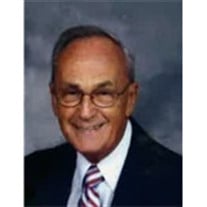 Anthony William Mostkiewicz, known to family and friends as "Bill", was born January 24th,1927 to Antoni and Czeslawa Mostkiewicz in Brooklyn, N.Y., the sixth of seven children. He passed away Friday, April 8, 2022 in Lady Lake, Florida at 95 years of age. Bill, formerly of Brentwood and East Islip, N.Y., Whiting, N.J. and North Port, FL. was a beloved father, grandfather and great-grandfather. Bill was married to the love of his life, Maureen (Healy) Mostkiewicz, for 63 years before her passing in 2014. Together they raised their only child, a daughter, Kathleen. Bill proudly served his country as a Medic in the U.S. Navy during WWII, enlisting at age 17. After the war, Bill attended the National Institute of Banking and spent 40 years with Citibank in Manhattan, N.Y. His funny, direct style charmed and delighted all he met. Bill Mostkiewicz is lovingly survived by his daughter, Kathleen Gallo, his treasured grandchildren Kristen, Jenna and Melissa, four great-grandchildren, Abigail, Emma, Cody and Charlie, his sister-in-laws, Kay and Lily, nieces and nephews as well as an extended family of relations and friends. We are all so grateful to have had him in our lives for so many years. A wake and visitation will be held from 3-5pm and 7-9:30pm on Tuesday, April 19, 2022 at Chapey and Sons Funeral Home in East Islip, NY followed by Mass at St. Mary's Roman Catholic Church in East Islip on Wednesday, April 20, 2022 at 9:45am. Family and friends will join together to honor him with a Celebration of Life gathering at a later time. In lieu of flowers the family has suggested a memorial tree planting or donations to the Alzheimer's Association. The website profile for Anthony William Mostkiewicz can be found here: https://chapeyfamily.com/tribute/details/4490/Anthony-Mostkiewicz/service-information

Anthony William Mostkiewicz, known to family and friends as "Bill", was born January 24th,1927 to Antoni and Czeslawa Mostkiewicz in Brooklyn, N.Y., the sixth of seven children. He passed away Friday, April 8, 2022 in Lady Lake, Florida at... View Obituary & Service Information

The family of Anthony William Mostkiewicz created this Life Tributes page to make it easy to share your memories.

Anthony William Mostkiewicz, known to family and friends as &quot;Bill&quot;,...

Send flowers to the Mostkiewicz family.