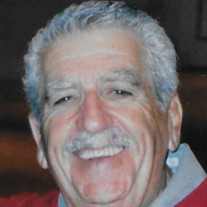 CIMORELLI, ANTHONY S., 84, The Villages, FL passed away on Monday, May 16, 2022. Anthony (Tony) was born in Somerville, MA on August 26, 1937. He was a long time Somerville resident and contributor who spent the last 24 years as a resident of The Villages in FL. Tony was predeceased by his parents, Dominick and Lena (Grace) Cimorelli, known as "Bobbi" to her family, and his wife of 53 years, Elizabeth Cimorelli. Tony is survived by son Stephen A. Cimorelli; son Anthony L. (Lisa) Cimorelli, and grandchildren Ashley and Ryan and great-grandchildren Michael and Maverick; stepson Charles E. (Kathleen) Taylor and grandchildren Ryan and Wesley; brother Paul (Ruth) Cimorelli and brother Gary (Susan) Cimorelli and godchild Lou; and first wife Barbara Chianese. A Somerville High School graduate (1955), Tony served in the US Army and US Army Reserves (1960-66). He was Athletic Director of Saint Clement Church for 20 years (1976+) and actively involved in Somerville sports as Babe Ruth League officer and coach, baseball umpire and basketball referee. Recognized for his 40+ years of advanced filtration industry contributions, Tony was part of the cornerstone of the E-Coat community. His Army Captain wrote in 1961, “PFC Cimorelli is a tireless and conscientious worker. His appearance, performance of duty and personal conduct have earned him the respect of both his superiors and subordinates.” To the benefit of family and friends, Tony held to this standard throughout his life while maintaining a keen sense of humor. Visitation will be held at the Lady Lake Chapel of Beyers Funeral Home, 134 N US HWY 441, Lady Lake, FL 32159 on Monday, May 23rd from 2-4 PM. Mass of Christian Burial will be Celebrated at St. Timothy’s Catholic Church in Lady Lake on Tuesday, May 24th at 8:30 AM. Interment will be at the Florida National Cemetery, 6502 SW 102nd Ave, Bushnell, FL 33513 following the Mass. In lieu of flowers, donations may be made in Anthony Cimorelli’s memory to St. Jude Children's Research Hospital, 501 St. Jude Place, Memphis, TN 38105. Arrangements entrusted to Beyers Funeral Home and Crematory, Lady Lake, FL. Online condolences may be left at www.BeyersFuneralHome.com.

CIMORELLI, ANTHONY S., 84, The Villages, FL passed away on Monday, May 16, 2022. Anthony (Tony) was born in Somerville, MA on August 26, 1937. He was a long time Somerville resident and contributor who spent the last 24 years as a resident of... View Obituary & Service Information

The family of Anthony "Tony" Cimorelli created this Life Tributes page to make it easy to share your memories.

Send flowers to the Cimorelli family.