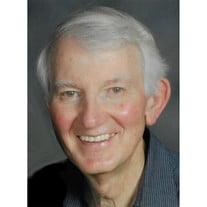 Allan C. Hartley, age 87, passed in peace on Wednesday, March 16, 2022 at his residence in Leesburg, FL. Allan Cobb Hartley was born in Lewiston, Maine, on July 8, 1934, to William Joseph Hartley and Ruth Hartley (née Skelton). "Allie" was the youngest of three children, who together spent summers in Ocean Park, Maine, and school-years in the small Massachusetts towns of North Adams, Sheffield, and Stow. With his own father a guiding light, Allan devoted his life to family, coaching, and service-always "doing it right." From hometown basketball courts and after-school dances, he went on to play guard for Tufts University where he majored in civil engineering. With a National Science Foundation fellowship, he earned his master's degree at Syracuse University, where he met the love of his life: Beverly Joan Steele of Batavia, New York, who survives him today after nearly sixty years of marriage. From 1956-1958, Al applied his math and coaching skills as a Navy Officer, stationed in Norfolk, Virginia, and Green Cove Springs, Florida. Al and Bev were married in 1962, and spent their honeymoon year as school teachers at the Subic Bay naval base in Olongapo, Philippines. In 1964, Al was hired to teach and serve as head basketball coach at Delaware Valley College in Doylestown, Pennsylvania, and within two years was promoted to Director of Admissions. He went on to earn his Ph.D. in Educational Administration at the University of Iowa. For the remainder of his career, Al worked at the University of Wisconsin-Green Bay, in the Office of Educational Research and Development (renamed the UW System Office) from 1972 to 1981, and for fifteen years as faculty member and Director of Adult Student Services. Upon his retirement in 1996, he was quoted in the campus newspaper: "Give the time to students. Hear them out. Think of it not as administrative, but as a service position." Al was also active in the Catholic Charismatic Renewal, and served on the National Service Committee Council. For years, he and his wife led Life in the Spirit seminars in Green Bay, Wisconsin, and after his retirement in Leesburg, Florida, where they have resided since 1998. As a lifelong learner, Al with Bev traveled widely, initiated alternative health and other discussion groups locally, and cherished their community of spiritual friends. Al also loved music and spent much of his free time on the piano applying self-taught musical theory to hit songs from the 1940s and 1950s. He is further survived by his beloved older siblings William J. Hartley and Joanne Curry; and his five children Lauran Ruth Hartley (Pema Bhum); Alane Louise Hartley (Russell Braen); David Allan Hartley; Stephen Paul Hartley (Jillian); and Susan Elizabeth Hartley Brown (Graham). He was also a proud grandfather to Yumtsokyi Hartley Bhum; Mia Fairbanks Hartley; and Griffin Oliver Brown. A visitation will be held at Beyer's Funeral Home located at 1123 W. Main Street, Leesburg, FL 34748 on Friday, March 25, 4pm-6pm. The funeral Mass will be held at Saint Paul Catholic Church at 1330 Sunshine Avenue, in Leesburg, on Saturday, March 26, starting with music and eulogies at 9:30am; and interment on Monday, March 28 at 11am, at Florida National Cemetery in Bushnell, FL. In lieu of flowers, please consider a donation in the name of Allan Hartley to Saint Paul Catholic Church, or to the Fisher Center for Alzheimer's Research Foundation using the designated memory wall. Condolences may be left at http://www.BeyersFuneralHome.com.

The family of Allan Cobb Hartley created this Life Tributes page to make it easy to share your memories.

Send flowers to the Hartley family.