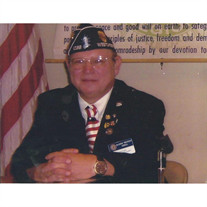 Alden (Butch) W Udell, age 73 entered Eternal life after a lengthy illness on April 6, 2022. He was born in Cleveland, Ohio on February 15, 1949 to Urban and Marie (Arthur) Udell. He was the beloved husband to Carol Pirone-Udell (nee Manganello). He was a devoted father to Alden (Hilary), Robert (Melissa), Leonard (Patricia) Udell and Dawn (Robert) Hasse. He was a loved stepdad to Joseph (Calli) Pirone. He loved his grandchildren, Shawn and Keri Turlij, Andy, Cory, Robert, Nick, Leonard, Marcus, Amari and Sarah (Miller) Udell - and Dawns Children, BJ, Heather, Jessica, Aviendha, Gabrielle, Isaiah, Lydia, Josiah and Daniel and Charlotte. Dear Brother to Hazel (John)Swindell, Arline (Tony) Sclimenti, Jo (Jack) Obrien, Cathy Heim, Cindy (John) Dominick, Sherri (Manny) Sclimenti, Geri Frantz, Mark and Lenny (Maryann) Udell. He was an uncle to many nieces and nephews, great uncle and recently a great-great uncle. Butch entered the United States Army at the age of 17 and was with the First Calvary Division. He had two tours in Vietnam and was with National Security. He went to work for the National Weather Service as a Meteorologist and retired from there. Butch was a proud member of The American Legion where he was a Commander in Ohio and NY and served as District Adjutant in Florida. He most recently belonged to Post 347 in Lady Lake. He also belonged and was active in the VFW in Ohio and many other patriotic organizations. He belonged to the Knights of Columbus as well. Butch's kind heart and wit will be missed by many. Services will be held at 9:00 am on Tuesday, April 19, 2022 at Beyers Funeral Home on US 441in Lady Lake followed by a Military Service at Florida National Cemetery in Bushnell. The family asks that in lieu of flowers donations can be made to the ASPCA, St Jude's or the charity of your choice. Arrangements entrusted to Beyers Funeral Home and Crematory, Lady Lake, FL.

Alden (Butch) W Udell, age 73 entered Eternal life after a lengthy illness on April 6, 2022. He was born in Cleveland, Ohio on February 15, 1949 to Urban and Marie (Arthur) Udell. He was the beloved husband to Carol Pirone-Udell (nee Manganello).... View Obituary & Service Information

The family of Alden W. Udell created this Life Tributes page to make it easy to share your memories.

Send flowers to the Udell family.