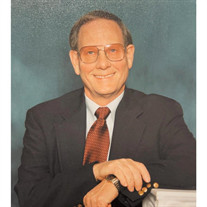 Not sure what to send?

Albert “Cecil” Emerson, 81, of Leesburg peacefully passed away on Sunday, June 18, 2022. He was born in Leesburg, Florida on March 24, 1941 to Christopher Ray and Mattie Ward Emerson. Cecil attended Lake County Schools and graduated from Leesburg High School in 1959. He attended Ocala Junior College then transferred to Auburn University, studying agriculture with an emphasis on animal husbandry, before returning to Leesburg to work on the family’s ranches and orange groves and help manage the family store, Emerson Grocery and Market. After leaving the family business he went to work for Certified Grocers which was acquired by Eli Witt then later obtained by H.T. Hackney. Cecil was a devoted husband to Gail Brande Emerson for 61 years. He was a loving father and dedicated to his family. He is survived by his son, Jeff (Margaret) of Leesburg, and two daughters, Sandra Fechtel (Eric) of Grand Island, and Susan Andrews of Altoona. Cecil was blessed with seven grandchildren, Jennifer Elmatti, Austin Wood, Kevin Fechtel, Morgan Emerson, Trace Andrews, Scott Fechtel, and Braelyn Andrews. He has two great granddaughters, River Elmatti and Kylie Fechtel. He is also survived by his brother Jerry (Charliene) of Ocala and several nieces and nephews, their children and families. He was predeceased by his parents and siblings; Virginia, Ray, Jimmie, and his infant twin brother. Cecil enjoyed hunting, fishing and was a sports enthusiast, especially boxing, baseball, football, and golf. He was passionate about current political news and events. He had immeasurable pride and love for his family. He will be deeply missed. Beyers Funeral Home, located at 1123 West Main Street Leesburg, FL is overseeing the arrangements. A family and friends gathering will be held on June 30, 2022 from 4:00 p.m. - 5:00 p.m. followed by a Celebration of Life service at 5:00 p.m. officiated by Gary Blanchard. There will be a reception after the service at First Baptist Church Leesburg in the Fellowship Hall 220 N. 13th Street, Leesburg, FL. Donations to First Baptist Church Christian Care Center or Cornerstone Hospice are appreciated as are flowers. The family would like to express a huge thank you to everyone for all the prayers, phone calls, cards and text messages. Please continue to pray for them during this difficult time.

The family of Albert "Cecil" Emerson created this Life Tributes page to make it easy to share your memories.