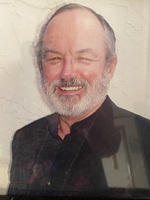 Donald E. Martin, Sr, age 77, was called away from this mortal realm on June 1, 2021, born in Anderson, Indiana, was a 54 year resident of St. Petersburg before relocating to Lake Panasoffkee, Florida in 2001.He worked in his early years as an Electrician before advancing into the Architectural/Engineering Contract Administration profession for some of the nation’s largest Architectural/Engineering firms. Several of his largest projects include, being a Project Representative on the original Ice Palace, Tampa which is now Amalie Area, and Coleman Federal Correctional Institution in Sumter County, Florida. A $500,000,000 project over a ten year duration.He was ordained to the Gospel ministry in 1975 and was called as Elder/Pastor of Lealman Bible Church (Old Order of Baptist) established in 1980 in St. Petersburg He was an automobile drag racer in the 1980’s and a custom Drag and Pro street car builder/innovator which merited national car magazine exposure. He was an amateur radio hobbyist since the early 90’s (KF4QXG) After relocating to Lake Panasoffkee, he was used as an itinerate minister among the Old School Primitive Baptist. He was a member of Empire Primitive Baptist Church in Lanier County, Georgia before moving his membership to Fellowship Primitive Baptist Church in Wimauma, where he held position as Elder/Pastor at Fellowship Church in 2006 until 2015.His youngest daughter (6-14-78), Jillian Ann, preceded him in death, March 8, 2003. Survivors include a daughter, and his End of life caregiver, Tamara L . Martin, Pinellas Park, a son, Donald E. Martin, Jr., St. Petersburg. Brother, Ronald E. Martin, Sr, Tennessee. Nephew, Ronald E. Martin, Jr, Tarpon Springs. Niece, Connie Martin Davis, Pinellas Park, 4 grandchildren, Rachel, Dylan, Hunter, Gabbie. 1 great granddaughter, Kinsley. As well as many brothers and sisters in Christ, who throughout his illness, were of comfort and spiritual support. Burial at Fellowship Primitive Baptist Cemetery, Wimauma


To send flowers to the family or plant a tree in memory of Donald E Martin Sr., please visit our Heartfelt Sympathies Store.