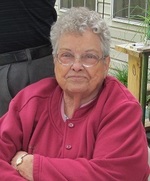 She graduated from Niles High School in the class of 1944. On September 1, 1945, at the United Church in Cassopolis, Michigan; she was joined in marriage to Alvin A. Bowman; son of Roscoe H. Bowman and Almeda (McClure) Bowman. Together they raised three children.

Irma was an avid genealogist, spending many years researching and documenting their family history; for which her family is dearly grateful. She also enjoyed knitting, sewing, jig saw puzzles, cards and board games. She was generous to all of her family by establishing life-long family traditions, making hand-crafted items, as well as teaching her skills to her growing family.

She was a devout Christian beginning in early childhood, a member of the Union Protestant Church of Dailey, later at Pleasantview Church of Christ; and encouraged all of her family in developing their faith.

She was preceded in death by her parents; sister, Betty McIntyre; and grandson, James E. Bowman, Jr.
Cremation has taken place, burial will be at Brookside Cemetery, Dailey, Cassopolis, Michigan. A memorial service will be held in Michigan at a later date.

Arrangements are being provided by Beyers Funeral Home, Umatilla, Florida.


To send flowers to the family or plant a tree in memory of Irma J. Bowman, please visit our Heartfelt Sympathies Store.