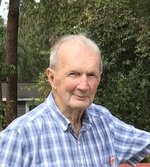 On Monday, April 12, 2021 Theodore “Ted” Bohn Hutchison peacefully passed away at the age of 91. Ted was born in New Castle, PA to Theodore and Alice Hutchison on March 17, 1930. As a young boy, his family moved to Erie, PA then eventually settled in Edinboro, PA. Ted enjoyed playing and excelling in all types of sports for the Edinboro Turtles. Upon graduation from Edinboro High in 1948, he enlisted in the United States Marine Corp. and served in Korea. After his military service, he returned to Edinboro and began building his family with his wife, Margaret Harned. Ted worked alongside his father in building homes in the Erie/Edinboro areas. In the years that followed, Ted formed Hutchison Builders and continued to build many, many homes in Edinboro and cottages on the lakeside. He single-handedly built the home which, in 1963, he moved into with his wife and their five children.

Ted was a good man and an even better father. His five children idolized him all their lives and they learned the importance of family, hard work, integrity, honesty, and so much more. He had a way with people, he never met a stranger, and always had a never-ending supply of stories and jokes that always made people feel good and laugh.

In later years, Ted spent winters in Florida with all of his children. He spent summers in Edinboro at the lake. He loved family get-togethers, our annual Super bowl party, weekly family card nights, going out to breakfast, and anything that had to do with his family.

Ted is survived by his sister, Alice (Frndak) and brother, Donn Hutchison. Five children, Ted (Lynda), Tom (Amy), Patrick, Nancy (Paul) and Kathy (David). Many grandchildren, and even more great-grandchildren, cousins, nieces, and nephews. He loved them all.

He was preceded in death by his parents, Ted and Alice Hutchison, and two brothers, Merle Hutchison and Homer Hutchison.

To those who knew Ted well, “If you’re not 15 minutes early, you’re late.” “You don’t love things, you like them very much…you love people.” “Let’s do it!”

To send flowers to the family or plant a tree in memory of Theodore Ted Hutchison, please visit our Heartfelt Sympathies Store.