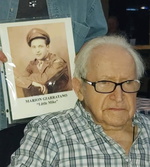 Michael Giarratano, 102, of Bushnell, Florida originally from Buffalo, NY passed away January 15, 2021. Michael was catholic. He enjoyed gardening, making wine and cooking. He was a lifetime member of the VFW 7122 of Florida City, Joe Nic Barco Post American Legion. He was also a member for post 101 of Beville’s Corner; where he was the commander for four years.

In Lieu of flowers please consider a donation to the VFW of Floral City Post 7122.

To send flowers to the family or plant a tree in memory of Marion Michael Peter Giarratano, please visit our Heartfelt Sympathies Store.