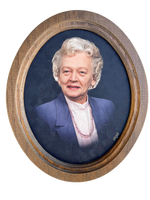 Mrs. Rosa Lee Tomberlin, of Lake Panasoffkee, Fla., passed away January 15, 2021 at the age of 94. Rosa Lee was born in Tampa, Fla. on August 17, 1926. In high school, Rosa Lee was a star female athlete and was named the City of Tampa's All-State Forward in basketball. After high school, she attended Florida State College for Women where she lettered in multiple sports and was in the first graduating class of Florida State University in 1948. After college, she began her teaching career at Citrus High School in Inverness, Fla. before moving to Sumter County. She then taught at Wildwood High School, followed by Coleman School, before her long career as a physical education teacher and coach at South Sumter High School. After her retirement, Rosa Lee was elected as the first female school board member in Sumter County. She was a past president of the Sumter County Retired Educators Association. She also served as president of FSU’s Emeritus Alumni Association and was awarded the prestigious Circle of Gold as recognition for her achievements and service to the University. She was a long-time member of the United Methodist Church of Lake Panasoffkee.

She is preceded in death by her parents Mabel and H. Oscar Whitney and her brother James Davis.

In lieu of flowers, donations may be made to the Sumter Schools Enhancement Foundation (2680 West CR 476 Bushnell, FL 33513) in honor of Rosa Lee Tomberlin. A memorial service will be announced at a later date.

To send flowers to the family or plant a tree in memory of Rosa Lee Tomberlin, please visit our Heartfelt Sympathies Store.