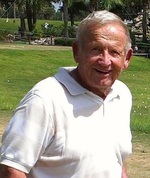 Dennis David, 86, of The Villages, Florida, passed away at his home on November 25, 2020, after a long battle with kidney disease. He was born in Evanston Illinois on October 12, 1934.
He enlisted in the United States Army and served as a Corporal for three years. He joined the Dade Country Metro Firefighters where he became a lieutenant and served for 34 years retiring in 1995. Dennis Loved sports!! He played Army football then Semi-Pro football for Miami. He won a State championship in racquetball and loved to play softball. He also spent a lot of time shooting pool. He was an avid spear fisherman, a lobster diver and deep-sea fisherman.
Dennis is survived by his wife Sharon of 56 years, his son Robert and his daughter Debbie. His daughter in-law Sylvia and his grandchildren Niki and Rachel.
He will be missed by all that knew him.
The funeral will be held at St. Vincent DePaul Catholic church on Thursday, December 3, 2020 at 1:00 PM.
Arrangements entrusted to Beyers Funeral Home and Crematory, Lady Lake, FL. Online condolences may be left at www.BeyersFuneralHome.com

To send flowers to the family or plant a tree in memory of Dennis M. David, please visit our Heartfelt Sympathies Store.