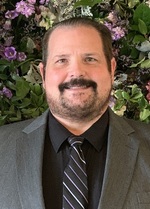 William “Bill” Harold Bobulinski, 54, of Leesburg, Florida, passed away on Sunday, November 15, 2020. Born in Leesburg, FL, he spent his youth in Friedens, PA, and returned to Leesburg in 1976. He spent many years working in the food service industry. Many locals remember him from his days managing Fifth Street Char House in Downtown Leesburg. It was there he cultivated numerous lifelong friendships. After leaving the restaurant, he took to the roads as an over the road truck driver, delivering fresh flowers to flower shops all over the US for LCT Trucking. He always considered himself a “paid tourist”. It was a job that was all about the adventure and sparked his interest in the floral industry. Along the way, he met his life partner and decided to settle back down in the hometown he so dearly loved. In 2004, he became a managing partner at Miss Daisy’s Flowers and Gifts in downtown Leesburg. It was there that he discovered his passion for the floral industry.
His involvement with the floral industry grew by leaps and bounds after becoming a BloomNet member. In the beginning no one knew which was Bill or Bob, but quickly knew you got two for the price of one, and never one without the other. Known as, the BloomNet poster children, they gave back as much and more than they received. Always there to help others understand how to make a relationship with a service provider work, grow and prosper.
Along with being a long time Member, Board Member, Treasurer and Advocate of The Florida State Florists’ Association (FSFA), he was given the distinction of mentoring incoming members of the association. In 2019, he was the recipient of the prestigious “Hall of Fame-Place in the Sun” award for outstanding dedication and service to the floral industry from the FSFA. On a state level, FSFA would not be the association they are today with the leadership and commitment both have given so tirelessly.
On the national level, his involvement in the floral industry reached to the American Institute of Floral Designers (AIFD) where he was a stranger to none. AIFD is the world’s largest Floral Association and here Bill became involved to support his partner Bob in his achievement in becoming a prestigious AIFD member and then continued as he supported all the other members with the same goal in mind by jumping in the deep end of the volunteer program and working side by side on the membership committee. Many AIFD members had no idea Bill was not a member of the association as he worked alongside of everyone else and like always never complained, stopped or gave any less than his all.
He was fun loving and bigger than life itself. He will always be remembered by his laughter, and contagious smile. His legacy will live on as he touched the lives of people from all over the world.
He is survived by his life partner of 19 years, Bob Tucker, siblings Deborah (Billy) Myers of Acme, PA, Terence (June) Bobulinski of Hernando, FL, Sharon Bobulinski of Fruitland Park, FL, Sue (Rich) Jarus of Fruitland Park, FL, and many beloved aunts, uncles, cousins, nieces and nephews. He was predeceased by his mother, Dorothy Mae Bobulinski, his father, Terence Bobulinski Sr. and his brother Tom Bobulinski.
A Celebration of Life will be held on Sunday, November 22nd from 2:00pm to 5:00pm at The Venetian Center, 1 Dozier Circle in Leesburg, FL. For those unable to travel or attend, the Celebration of Life will be live streamed.
Join Zoom Meeting
https://zoom.us/j/4686795652?pwd=WlgvbWE3MFR5UXZrSHNDQjFaQlg4dz09

In addition to Floral Memorials, those that would like to, may contribute to the “Bill Bobulinski Education Scholarship Fund” through the Florida State Florists’ Association website.
http://floridastatefloristsassociation.com/Bill-Bobulinski-Education-Scholarship-FUnd/


To send flowers to the family or plant a tree in memory of William H. "Bill" Bobulinski, please visit our Heartfelt Sympathies Store.