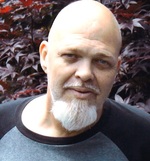 Born in Binghamton, New York he moved to Connecticut at a young age. Scott attended New Britain public schools. He entered the U.S. Navy in 1985 and served aboard the USS William V Pratt. Upon completion of his service, Scott returned back to Terryville and Bristol Ct where he graduated from the New England Tractor Trailer School and started his 32 year professional driving career. He loved his big Rigs and traveled all over the U.S. with his sidekick Woody, his Jack Russell terrier riding right by his side. In his free time when not on the road Scott loved to get on his Harley Davidson and take long rides with friends.

He was a devoted Boston Red Sox and Oakland Raiders Fan and was looking forward to watching them play in their new home. Scott was able to hear them play one last time. As anyone who knew Scott knows that he marched to his own drum and was always eager to go or try something new. He recently was made aware that he was a direct descendant of Peregrine White who was the 1st born child on the Mayflower at anchor.

Scott was predeceased by both his maternal and paternal grandparents. The family wishes to thank Scott’s life long friends who made this journey with him to the very end. John Pierce, Juancho and Jennifer who provided Scott one Last road trip, Elaine and Michael Lafland, William Towns, Ken Young, Vinny Pollicita, CJ who has provided Woody a new home, Rick ,John & Linda and Sarah, John, and Dominique Picard. All your kindness, phone calls and visits brightened his days.

The family has stated that a Memorial Service will be planned in Connecticut at a later date. Donations in lieu of Flowers can be made to the following Charities in Scotts Memory The National Cancer Society and Animal Rescue Foundation in Terryville Connecticut.

To send flowers to the family or plant a tree in memory of Scott R. Laitinen, please visit our Heartfelt Sympathies Store.