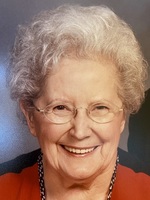 Ann Emery Hunter, 94, passed away on August 1, 2020 at Leesburg, FL. She was born August 29, 1925 in Georgetown, OH, the only daughter of Homer C. and Helen (Swope) Emery. She was reared in Bloomingburg, OH. After graduating from Bloomingburg High School in 1943, Ann married James W. Hunter in 1945 and in 1946 they moved to Miami, FL. They also lived in Birmingham, AL and West Palm Beach, FL before moving to Ocala in 1955. She was the retired bookkeeper for the family business.

Ann was a member of the First United Methodist Church of Ocala, and has served as Chairperson of the Children’s Division, Chairperson of the Council on Ministries, the Staff Parish Relations Committee, the Mission Work Area, President of the Board of Trustees, President of United Methodist Women, Lay Leader and served as the Church Historian. She sang in the Chancel Choir for over 50 years and served as the Music Librarian for many years.

Ann was a lifetime member of the West Palm Beach Jaycee Wives Club. She served as President of the Ocala Junior Woman’s Club, Secretary of the United Way, and President of the Marion County Senior Services. She was honored in 1973 with the “Service Above Self Award” by the Ocala Rotary Club. She was a member of the Daughters of the American Revolution, the Society of Mayflower Descendants and the Magna Charta Dames.

Interment will be in Hillsboro, Ohio.

In lieu of flowers, the family requests that memorials be made to the Music Department of the First United Methodist Church, Ocala or to the charity of your choice.

To send flowers to the family or plant a tree in memory of Ann Emery Hunter, please visit our Heartfelt Sympathies Store.