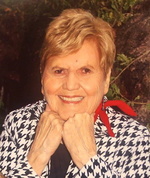 Christie was a native of Atlanta, Georgia, graduating from North Georgia College and attending Emory University. She pursued a career in Microbiology and retired from Ciba Vision Care (Novartis) and moved to The Villages, Florida in 1998.

After moving to The Villages, Christie began a second career as a writer. She published nine historical romance and three murder mystery novels that can be found online, and in The Villages Public Library. She belonged to several writing groups in The Villages, where she had many long-time friends and colleagues. Christie also was an avid card player, playing regularly with a group of her dearest friends.

Christie called The Villages home for more than twenty-two years. She was very proud of her adopted community and well-known in her neighborhood, where her neighbors were also good friends who watched out for and supported each other. She was a kind, considerate woman, whose thoughtful, graceful approach to life, was appreciated by friends, family and all who knew her. She will be greatly missed.

A Celebration of Life for family and friends will be scheduled later this summer, due to current pandemic restrictions. In lieu of flowers, the family requests a charitable donation in Christie’s honor be made to the Humane Society of the United States or local chapter of choice.

To send flowers to the family or plant a tree in memory of Christine D. Seiler, please visit our Heartfelt Sympathies Store.