In Memory of
Donald W.
Snethkamp
1921 - 2020
Click above to light a memorial candle.
Memorial Candle Tribute From
Beyers Funeral Home and Crematory
"We are honored to provide this Book of Memories to the family."
View full message >>>
Send Flowers
Menu 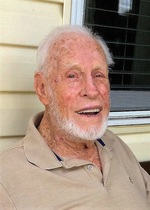 Donald (Don) W. Snethkamp, passed away on January 20, 2020 at the age of 98. Born in Warren, Ohio, and having resided in several U.S. cities, Don and his loving wife Barbara moved to The Villages in 1990. Prior to that they resided in The Hideout, a private residential community in the Poconos, where he was Vice President of Operations.

Don was a successful business executive, serving in roles as President, Executive Vice President, and Board Member of a number of companies in Ohio, California, New York, and Massachusetts. An engineer by profession, he graduated from the General Motors Institute. He was also a member of the United Nations 25th Anniversary Day Committee.

A World War II vet, Don was an Air Corp B25 pilot. He was a member of The Villages first Honor Flight in 1992, an experience which had a deep and lasting impression on him. In retirement he was an avid golfer (shooting his first hole-in-one at age 92), wood worker, reader, and sports enthusiast. He also enjoyed travel, especially cruises to such sites as Russia, the Mediterranean, the Caribbean and Alaska.

Don is survived by his wife of 44 years, Barbara, three of his four children, Ralph (Barbara), Donna (Jim), and Pandora, three step children, Chris (Sonya), Cassandra (Dave), and Gabrielle (John), eight grandchildren, seven great grandchildren, and daughter-in-law, Karen. He is predeceased in death by his sister Thelma, and son David.

In lieu of flowers, memorial contributions may be made to The Villages Honor Flight (villageshonorflight.org).

To send flowers to the family of Donald W. Snethkamp, please visit our Heartfelt Sympathies Store.