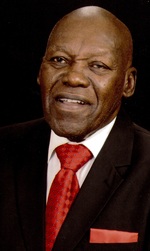 Simon James Olden Jr., known as “Sigh” to family and friends, was the first born to the union of the late Simon, Sr. and Mozelle Olden in Sumter, South Carolina.
He is preceded in death, only five months prior by his loving wife of more than 40 years, Phyllis.
He leaves behind to cherish his memory brother Robert, twin siblings Rodney and Rhodes, and is preceded in death by their youngest brother, Phillip.
He nurtured three children in a previous 25-year marriage: Darryl, Pamela and Brian (daughter-in-law, Angela.)
Sigh has five grandchildren: Cedric, Kevin, Brandon, Brianna, and Ella, and eight great-grandchildren: Jacob, twins- Aaliyah and Tatiana, Kevin Jr., Paris, Tiana, Summer and Kai.
He is survived by a host of nieces, nephews, relatives, longtime friends and neighbors.
As an awarded track and field athlete and member of Kappa Alpha Psi Fraternity Inc., Simon earned his degree from North Carolina Agricultural and Technical University and received a Master’s degree from New York University.
He taught Auto Mechanics, Industrial Arts, coached high school track and field, was a mentor to many as he served as a school administrator in several states and school districts.
Sigh served in the U.S. Army as a Second Lieutenant during WWII and received the National Defense Service Medal and Army of Occupation Medal (Germany).
He loved his community and proudly served as a member of the Knights of Columbus and Kiwanis of Leesburg.
He loved his family, enjoyed traveling, collecting clocks, creating DIY projects and sharing his contagious smile, quick wit and sense of humor with everyone he encountered. He truly lived a rich, fulfilled life!
As Dad would say: Life is good! Don’t screw it up!