To share your memory on the wall of Donald Smith, sign in using one of the following options:

Provide comfort for the family of Donald Smith with a meaningful gesture of sympathy.

Born in rural Hodge, Louisiana, on November 22, 1930, one year after the Great Depression began, and like so many of his generation Don grew up knowing that complaining was pointless; that there is virtue in hard work; and that character matters. From the earliest days as a shoeless boy, he worked hard – delivering newspapers, collecting coke bottles, and doing anything else he could to support the cause. Through it all he developed a lifetime of callouses on his feet, and integrity in his soul, and a legendary stubbornness of character, proving the truth of Proverbs 22:6 “Train up a child in the way he should go; even when he is old he will not depart from it.”

Growing up when Don did, and where he did in that tiny little town, also placed him a few doors down from Elsie Mae Maxwell. They grew up knowing each other all their lives, and eventually surrendered to God’s plan for them just after she turned 18 and just before he turned 20. Don and Elsie remained as one for the next 69 years.

Along the way, Don served his country as a Staff Sergeant for the Air Force during the Korean War. Following his honorable discharge, he and Elsie worked for a few years before Elsie convinced him (he would say he “decided”) to get his degree in electrical engineering at LSU. His first job out of school was at the prestigious Bell Laboratories, and he worked for the Bell system until he retired in the early 90’s, whereupon, he and Elsie moved to The Villages to remain active and enjoy life. Don and Elsie attended First Baptist Church of Leesburg and served in the Campus Ministries for many years.

He and Elsie adopted three children God placed in their path – Roger, Miriam and Paul. True to his character, he attended seemingly every ball game, recital, and awards program they did. He taught his children about the love of Christ every day by training them up in the way they should go. He led by example by serving as a deacon and a Sunday School teacher at church. Don enjoyed traveling, playing games, telling jokes, but mostly he loved his family.

Visitation will be held at Beyers Funeral Home, Lady Lake, FL on Monday, October 21, 2019, starting at 10:00 a.m. followed by the service at 11:00 am. A graveside service will take place at the Florida National Cemetery, Bushnell, FL at 1:00 pm.

Memorials are suggested to the Men’s Ministry (https://www.christiancarecenter.org) of First Baptist Church of Leesburg.

To send flowers to the family or plant a tree in memory of Donald Miller Smith, please visit our Heartfelt Sympathies Store.

We encourage you to share your most beloved memories of Donald here, so that the family and other loved ones can always see it. You can upload cherished photographs, or share your favorite stories, and can even comment on those shared by others.

Guaranteed hand delivery by a local florist
BC

Posted Oct 17, 2019 at 10:37am
Roger, Sheila, and family, please know that you are in my thoughts and prayers in the loss of your Dad who filled your hearts with much joy and gladness through the years. May your dear memories sustain you all in your grief and the assurance of his eternal hope comfort you in the days ahead of you all!
Brenda F. Cook
Comment Share
Share via: 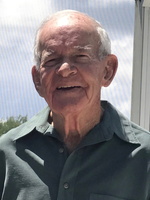