To share your memory on the wall of William Chaney, sign in using one of the following options:

Provide comfort for the family of William Chaney with a meaningful gesture of sympathy.

Print
William Howard Chaney, 91, of Umatilla, FL passed away on Monday, September 2, 2019. He was born in Cambridge, OH. He was retired from the United States Navy as a Lieutenant Commander and a member of the VFW Post 209.

He is su... Read More
William Howard Chaney, 91, of Umatilla, FL passed away on Monday, September 2, 2019. He was born in Cambridge, OH. He was retired from the United States Navy as a Lieutenant Commander and a member of the VFW Post 209.

A celebration of life will be held at 2:00 p.m. on Saturday, September 14, 2019 at the Beyers Funeral Home Chapel with Pastor Omar Gonzalez officiating. In lieu of flowers contributions may be made to the Villages Hospice House at 601 Casa Bella, The Villages, FL 32162.
Read Less

Provide comfort for the family by sending flowers

We encourage you to share your most beloved memories of William here, so that the family and other loved ones can always see it. You can upload cherished photographs, or share your favorite stories, and can even comment on those shared by others. 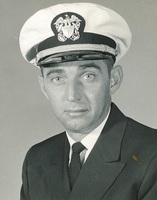